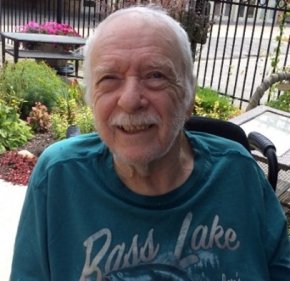 As he lays wreaths at two cenotaphs in separate ceremonies this Remembrance Day, Robert Millar’s thoughts will be with the lifelong friends he made during a 35-year military career and the Canadians who didn’t make it home from past wars.

A resident at Pine Meadow Nursing Home in Northbrook, Ontario, Robert, 81, followed his family’s long tradition of military service in the Canadian Armed Forces when he was only 17. Like one of his brothers who also joined the military, he was inspired by the sacrifices made by his father and three uncles who had all fought for Canada in the Second World War.

“They didn’t get injured, but they had a pretty tough time during the war,” he says. “I remember when I was in grade school, it wasn’t too long since some of the parents came home (from the war) and they would never talk about their time in the service.”

Robert joined the military out of high school after the Second World War was over and achieved the rank of Chief Warrant Officer with the 708 Communication Squadron in Trenton by the time he retired.

In addition to postings with the Royal Canadian Corps of Signals and various units in the Kingston area, Robert also served on several peacekeeping tours overseas with the United Nations and NATO. He served in Egypt and Cyprus as part of UN peacekeeping forces, followed by two four-year tours with NATO along the border between East and West Germany during the height of the Cold War.

It was during his time stationed in Europe that Robert toured Canadian military cemeteries in the Netherlands and got to see firsthand the scale of the sacrifice Canadians made during previous wars.

Even though Robert was just a kid himself when he signed up, his connection to serving his country continues today. Robert is an active member of Branch 334 of the Arden Legion in Northbrook. Since he retired from active service, he has taken part in Remembrance Day ceremonies each year, laying wreaths at cenotaphs in Arden and nearby Mountain Grove.

“I look forward to it every year,” he says. “It’s important to remember.”

Extendicare is taking action, along with a coalition of national seniors’ living operators, including Chartwell, Responsive Group, Revera and Sienna, to make COVID-19 vaccination mandatory for all long-term care and retirement home staff across Canada. continue

To Our Extendicare Community, continue

There has been good news to start the year with vaccines being administered to vulnerable populations across Canada. Extendicare continues to work with our public health partners across the country to administer first and second doses to help protect our communities. continue

Our staff have fought day-in and day-out against this devastating virus for a year. While it has been difficult, the vaccine gives hope that we are nearing a return to better times. continue

Our Remarkable Moments view all